Letter to the Editor - When Homicide is not Homicide Anymore 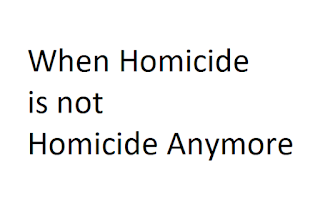 Did you know that abortion after 24 weeks of pregnancy, also known as late-term abortion, was considered homicide until January 22, 2019?

On January 22, 2019, the 46th anniversary of Roe v. Wade, Governor Andrew Cuomo signed the Reproductive Health Act into law (Bill s2796).1  The changes to the existing bill added a new article stating, “An abortion May be performed... within twenty-four weeks from the commencement of pregnancy… or at any time when necessary to protect a patient's life or health.”1  To be clear, “at any time” refers to the ability to legally abort a baby at any time during pregnancy – from conception all the way up to the baby’s birthday. 2

After reviewing the law, I found the newly added verbiage, as well as a definition removed. Both are worth mentioning. First, I will again quote the added verbiage in lines 19 and 20, “… an abortion may be performed at any time when necessary to protect a patient’s health.”1   And second, the definition of homicide, contained in lines 32-35, was struck from the bill: “Homicide means conduct which causes the death of a person [or an unborn child with which a female has been pregnant for more than twenty-four weeks] …” 1

I want to un-pack each of these changes.

In the new verbiage legalizing late-term abortion, protecting “…the patient’s health or life,” I questioned, “Is this new law so broad-sweeping that it could be abused?”  I desired to understand what defines a patient’s life or health.  How does one measure if a patient’s health is at risk, affording her the right to end her baby’s life at any stage of her pregnancy?

First, according to former abortionist, Dr. Anthony Levatino, “Abortions never have to be committed to save a woman’s life” – never. He affirms, when a mother’s life is at risk, “even if the baby may not survive post-delivery, it does not necessitate ending the baby’s life intentionally prior to delivery.  The goal is to attempt to save both lives, not to intentionally end the baby’s life to save the mother.”  3

In addition, over 1,000 medical providers have signed the Dublin Declaration, which affirms that abortion is “never medically necessary” to save the life of the mother.

“As experienced practitioners and researchers in obstetrics and gynecology, we affirm that direct abortion – the purposeful destruction of the unborn child – is not medically necessary to save the life of a woman.  We hold that there is a fundamental difference between abortion, and necessary medical treatments that are carried out to save the life of the mother, even if such treatment results in the loss of life of her unborn child.  We confirm that the prohibition of abortion does not affect, in any way, the availability of optimal care to pregnant women.”5

Furthermore, I found, that the patient’s health, as defined in the Supreme Court ruling of Doe v. Bolton3, includes the woman’s physical, emotional, psychological, familial, and the woman’s age.

“The medical judgment [for a late-term abortion] may be exercised in the light of all factors—physical, emotional, psychological, familial, and the woman’s age—relevant to the well-being of the patient.”3

So, wait! Health, when considering a late-term abortion, is not limited to physical health?  The patient’s emotional, psychological, family health, and her age are all relevant in this decision?  I could not help but conjecture some reasonable scenarios now legal due to this change: “I am not emotionally ready to care for a baby.”  “I am too old to care for a baby.”  I am already stressed and strapped with the two children I have; I couldn’t possibly care for another!”  With the passing of this “landmark law”, the list of legal reasons to end the life of this unborn child late term goes on and –  tragically, legalizing the murder of her baby up to the baby’s birthday.  This is considered progress?

The next change I desired further information was the striking of the definition of homicide for abortion after 24 weeks: “Homicide means conduct which causes the death of a person [or an unborn child with which a female has been pregnant for more than twenty-four weeks] under circumstances constituting murder, manslaughter in the first degree, manslaughter in the second degree, or criminally negligent homicide.”1

What changed?  Why was late-term abortion deemed homicide before January 22nd, 2019, and no longer homicide after the bill was made law?

What concerns me most about this legislation, and the celebration with which its passing was met, are the words of  Governor Andrew Cuomo, “I am directing that New York’s landmarks be lit in pink to celebrate this achievement and shine a bright light forward for the rest of the nation to follow.”2  We have already seen Virginia’s Democratic Del. Kathy Tran sponsor the “Repeal Act”, which seeks to repeal restrictions on third trimester (late-term) abortions.  What is being hailed as triumphant, I hail as a tragedy.  I pray the rest of our nation does not follow New York and Virginia’s lead.

Let’s listen to the immortal words of Norma McCorvey better known by the legal pseudonym "Jane Roe", the plaintiff in the Supreme Court Case Roe v. Wade in 1973, which legalized abortion in America, who, on January 9, 2013, lamented,

“Rowe v. Wade legalized abortion on demand in America and changed our nation in an unprecedented way…  I have three daughters and never had an abortion.  Abortion has eliminated fifty million innocent babies in the US alone since 1973…

The case which legalized abortion on demand was the biggest mistake of my life.  I am dedicated to spreading the truth about the dignity of all human life from natural conception to natural death.”4

Since Norma’s message of 2013, 10 million additional innocent children have been aborted – totaling 60 million.

Adding to this tragedy is the science that clearly supports the reality that, indeed, life begins at conception.  In fact, some of the world’s most prominent scientists and physicians testified to a U.S. Senate committee this truth.  One of the testimonies was that of Dr. Watson A. Bowes, University of Colorado Medical School who asserts:

“By all the criteria of modern molecular biology, life is present from the moment of conception.” 6

In summary, it should concern ALL citizens that the definition of homicide is so flippantly altered – this is a humanitarian issue, indeed!  Furthermore, regardless of where you sit, politically, abortion is homicide.  This new legislation has waged war against the unborn and only serves to take the lives of even more children who deserve a chance at life.

I humbly pray all candidates, regardless of party, will unite to protect our most vulnerable. Furthermore, I pray that you stand up for those who cannot defend themselves.  Life – every life – has dignity and purpose.

In the immortal words of Saint Mother Teresa of Calcutta,

“We must not be surprised when we hear of murders, killings, of wars, or of hatred...If a mother can kill her own child, what is left but for us to kill each other?

3.       3. Former abortionist: Abortion is never medically necessary to save the life of the mother (February 6, 2019) Virginia Christian Alliance - https://vachristian.org/former-abortionist-abortion-is-never-medically-necessary-to-save-the-life-of-the-mother/

Posted by kristen.soley at 1:06 PM No comments: