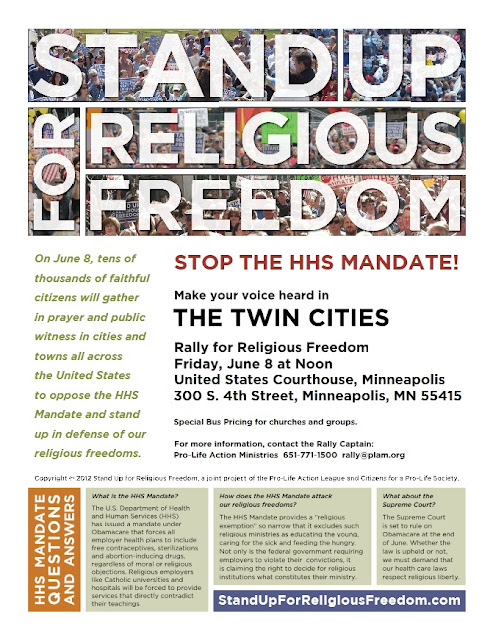 Join with us as we fight President Obama's HHS Mandate with the second round of "Nationwide Rallies for Religious Freedom," taking place in cities and towns across the United States on June 8 at Noon.

This "Mandate" from Obama's Department of Health and Human Services attacks our religious liberties by forcing employers to provide abortion-inducing drugs, contraceptives, and sterilization through their health plans (interfering with the free exercise of religion). It also narrowly defines what a religious institution is (the government establishing religion) and destroys the long standing constitutional tradition of protecting the conscience rights of the citizens of this country.
Christian hospitals, universities and charities are being ordered to obey the HHS Mandate, in direct opposition to Christian morals teaching.

Should this assault on our religious liberties remain, the logical next target will be those who pray outside their churches, i.e. 40 Days for Life and other prayer activities at abortion facilities.
Join with the TWIN CITIES Rally for Religious Freedom and help stop this unprecedented assault on religious liberty!

The following link is for a PDF promotional flyer that you may print out and distribute where appropriate.

Our First Amendment freedom of religion is supposed to guarantee that we will not be kept from practicing our faith or be told what to believe or how to live out our beliefs by the government. That is why this mandate is an attack on all Americans and not just Catholics. And our freedom of religion is an individual liberty that does not hinge on the faith to which we belong. And because as people of faith we organize together into churches and other institutions for worship and living our faith, these churches and other institutions enjoy the same First Amendment freedoms. As Cardinal Dolan of New York stated in his February 24, 2012 letter to all Catholic bishops, "In the United States, religious liberty does not depend on the benevolence of who is regulating us. It is our ‘first freedom’ and respect for it must be broad and inclusive-not narrow and exclusive. Catholics and other people of faith and good will are not second class citizens. And it is not for the government to decide which of our ministries is ‘religious enough’ to warrant religious freedom protection."

Some final thoughts:
We have the deceptive voices of those attempting force this mandate upon us testifying that we are seeking to deny contraceptives. There is nothing in the efforts to stop the HHS mandate that will or is intended to deprive women of contraceptives (as noble an effort as that may be.) The mandate has not yet been put into place and women in the United States today have unprecedented access to contraceptives, often freely available at taxpayer expense. Planned Parenthood has built a billion dollar business on dispensing contraceptives with our tax dollars while building their abortion empire. There is no need for this mandate to make contraceptives available for little to no cost for women.

God is so faithful, as our prayers are always heard, but based on this post from Sheila Liaugminas, I believe we have an answer as well. http://www.mercatornet.com/sheila_liaugminas/view/10747. God is so good.
Posted by kristen.soley at 10:08 PM