Teach the Books, Touch The Heart 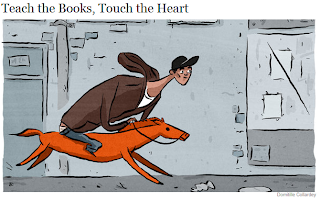 FRANZ KAFKA wrote that “a book must be the ax for the frozen sea inside us.” I once shared this quotation with a class of seventh graders, and it didn’t seem to require any explanation.
We’d just finished John Steinbeck’s “Of Mice and Men.” When we read the end together out loud in class, my toughest boy, a star basketball player, wept a little, and so did I. “Are you crying?” one girl asked, as she crept out of her chair to get a closer look. “I am,” I told her, “and the funny thing is I’ve read it many times.”

But they understood. When George shoots Lennie, the tragedy is that we realize it was always going to happen. In my 14 years of teaching in a New York City public middle school, I’ve taught kids with incarcerated parents, abusive parents, neglectful parents; kids who are parents themselves; kids who are homeless or who live in crowded apartments in violent neighborhoods; kids who grew up in developing countries. They understand, more than I ever will, the novel’s terrible logic — the giving way of dreams to fate.

For the last seven years, I have worked as a reading enrichment teacher, reading classic works of literature with small groups of students from grades six to eight. I originally proposed this idea to my principal after learning that a former stellar student of mine had transferred out of a selective high school — one that often attracts the literary-minded offspring of Manhattan’s elite — into a less competitive setting. The daughter of immigrants, with a father in jail, she perhaps felt uncomfortable with her new classmates. I thought additional “cultural capital” could help students like her fare better in high school, where they would inevitably encounter, perhaps for the first time, peers who came from homes lined with bookshelves, whose parents had earned not G.E.D.’s but Ph.D.’s.
Read More...
Posted by kristen.soley at 7:40 PM