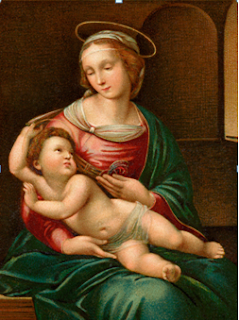 St. Thomas Aquinas defines prudence as “right reason applied to action.”[1]  The Catechism further states that prudence guides the judgment of conscience.[2]  It perfects the mind so that it is able to discern the true good in all circumstances and to choose the right means of achieving it.  Prudence is also called “practical wisdom,” and being practical it must be carried out and lived.[3]  Prudence is the first and most important of the cardinal virtues.  It is the cause of the other virtues being virtues at all, as its “right reason” in regards to the moral life, measures and informs the other virtues.[4]  Mother Teresa summed this up when she said, “Thoughtfulness is the beginning of great sanctity.”[5]
Modern parent educators at work in the general public often use the buzz phrase “parenting in the moment,” in order to pinpoint and develop how caregivers parent on the spot, in the heat of the moment, when they could be quite possibly at their wits end.  Mothers everywhere are faced with this scenario countless times in a week, a day, or even an hour.  A key factor in succeeding at this parental transformation is missing from the secular vantage point: the cardinal virtue of prudence acquired not only through natural means but also supernatural means.  Josef Pieper, author of The Four Cardinal Virtues, stated prudence entails acting in the moment, “situation conscience” (solertia); a mother quickly wraps her mind around the unexpected situation and decides with extreme quick-wittedness and clear-eyed objectivity.[6]  Prudence is infused for the purpose of eternal salvation at Baptism, but this prudence is limited; there is a “fuller” prudence that is acquired and guides man in all matters relating to human life.[7]  Particularly helpful for mothers disciplining the same mischievous behavior under the pressure of a host of household tasks as Pieper states, is prudence’s special nature concerned with the realm of “ways and means” and down-to-earth realities.[8]  “Prudence as cognition” includes, most importantly, the ability to be still in order to attain objective perception of reality, and in addition, the patient effort of experience.[9]  Beyond the concept of practicing over time, how do mothers gain this virtue, where do they start?

St. Thomas Aquinas lists eight quasi-integral parts of prudence.  The first five: memory, understanding or intelligence, docility, shrewdness [quickly finding the middle term], and reason fall under prudence as cognitive virtues, while foresight, circumspection, and caution, command and apply knowledge to action.[10]  Second, Pieper, in summarizing Aquinas, states: “the attitude of ‘silent’ contemplation of reality: this is the key prerequisite for the perfection of prudence as cognition, which perfection in turn involves three elements, namely: memoria [memory], docilitas [the ability to take good advice], solertia [composed readiness for the unexpected].”[11]  The first Christian is a perfect guide.  Does not the Mother of God exemplify “the attitude of ‘silent’ contemplation”?  Mary’s countenance was contemplative although the events in her life were chaotic as she traveled nine months pregnant to Bethlehem, searched the crowds for her twelve-year-old Son, and knelt at the foot of the cross.  St. Thomas Aquinas stated that “man has a natural aptitude for docility [being taught] even as for other things connected with prudence. Yet his own efforts count for much towards the attainment of perfect docility [teachableness]: and he must carefully, frequently and reverently apply his mind to the teachings of the learned, neither neglecting them through laziness, nor despising them through pride.”[12]

Mary is the perfect example and in the words of Blessed Mother Teresa she will help to “make your house – your family – another Nazareth where love, peace, joy and unity reign, for love begins at home.”[13]

God also places countless others in a mother’s life, however, to prepare and inform her to practice prudence.  The Gospel message preaches virtuous living in the actions of holy mothers, but often in motherhood counsel is also needed.  This is a significant reason why there is the proliferation of mother’s sharing groups, especially since in the modern world it is not the norm to house extended family under one roof and have another mother figure just down the hall.  St. Thomas Aquinas states, “those who need to be guided by the counsel of others, are able if they have grace, to take counsel for themselves in this point at least, that they require the counsel of others and can distinguish good from evil counsel.”[14]  This perhaps explains why Pope John Paul II implored all of the faithful to pray that the Holy Spirit give us the gift of good counsel.[15]  Josef Pieper further develops Aquinas’ words:
There is no way of grasping the concreteness of man’s ethical decisions from outside.  But no, there is a certain way, a single way: that is through the love of friendship.  A friend, and a prudent friend, can help to shape a friend’s decision.  He does so by virtue of that love which makes the friend’s problem his own, the friend’s ego his own (so that after all it is not entirely ‘from outside’).  For by virtue of that oneness which love can establish he is able to visualize the concrete situation calling for decision, visualize it from, as it were, the actual center of responsibility.  Therefore it is possible for a friend—only for a friend and only for a prudent friend—to help with counsel and direction to shape a friend’s decision or, somewhat in the manner of a judge, help to reshape it.[16]

For this reason the counsel of a prudent friend of the faith undertaking the same vocation of motherhood whether 100 feet or 1,000 miles away is priceless.

A true friendship with God through prayer, modeling Mary and the prudent advice of other mothers, and turning to the grace of the Sacraments are indispensible in cultivating the cardinal virtue of prudence along with an on-going education of the conscience.  The cultivation of prudence then amounts to applying it to personal, living, experience.  Pieper stated that “desiring the good does not make a decision prudent; but real understanding and proper evaluation of the concrete situation of the concrete act does.”[17]  Mothers also need to know what prudence is not.  To be imprudent is to be thoughtless, indecisive, negligent, blind, and remiss in decision, and of course disobedient towards the commandments.[18]  It is to be overly anxious about temporal things over spiritual matters.

Finally, there are multiple ways to help people know that they are on the right path to acquiring the virtue of prudence.  Josef Pieper lists characteristics synonymous with prudence: being the filter of deliberation; purity, straightforwardness, candor, and simplicity of character, and standing superior to the utilitarian complexities of mere ‘tactics’.[19]  These mere ‘tactics’ in this case amount to the secular approaches of parent educators teaching parents how to “parent in the moment” without the virtue of prudence, without faith.  Josef Pieper also wrote that humans can “receive ‘practical’ assurance and reinforcement from several sources: from the experience of life as it has been lived; from the alertness and healthiness of the instinctive capacity for evaluation; from the daring and humble hope that the paths to man’s genuine goals cannot be closed to him; from rectitude of volition and of ultimate “intention”; from the grace of direct and mediated divine guidance.”[20]  And of course, mothers must remember that a “life of friendship with God must not be construed in the sense that it is immediately ‘given’ or realizable in smooth and ‘harmonious’ development.”[21]  Mothers understand that there are so many ‘seasons’ in life, the ebb and flow of parenting often parallels the hilly ascent towards the virtuous life.  Pieper reminds us of how intensely the great saints loved the ordinary and commonplace.[22]